I can’t even say we were all sat there with baited breath expecting a windfall of cash from Rishi Sunak’s budget last week. I know many of us were hoping for something, anything, an acknowledgement of the importance of parks and green spaces. Well we got £9 million as part of the Spending Review and the LGA responded as follows:-

Responding to the Government’s announcement in the Spending Review of £9 million of funding to help local authorities create 100 new urban ‘pocket parks’ across the UK, Chair of the LGA’s Culture, Tourism and Sport Board, Councillor Gerald Vernon-Jackson, said:

“The LGA has long made the case for the importance of green and outdoor spaces for people’s health and wellbeing.

The lockdowns during the pandemic emphasised the importance of public parks to the physical and mental wellbeing of their communities and councils have been looking for ways to sustain and increase their provision.

This funding is a positive step and will enable more local authorities to create spaces to enable communities to build activity in their daily lives. However there remains a need to deliver some parks provision at scale rather than on the micro-scale of pocket parks.” 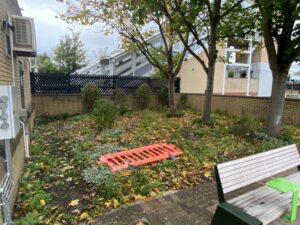 this is one in Leighton Buzzard, isn’t it marvellous

Let us put this into context shall we. We received £1.35 million in 2020, following on from £2.75 million in 2019, which adds up to £13.1 million for creating these mini parks. If we look at what the National Lottery has invested –  £1 billion invested in parks over the last 25 years. When you look at some of the parks that have been restored through lottery, and the true cost of these, the £13.1 million pales into insignificance. The lottery funded projects I have been involved with over the years adds up to over £15 million – for 5 parks.

The decades of evidence we have gathered would probably cover several football pitches now. We have lobbied for decades for decent funding, not just capital but revenue. Ministers openly proclaimed during Covid how important our parks were to our health and wellbeing. We know this, we all know this, they are preaching to the converted. We now have all our world leaders (and Macron) at COP26 in Glasgow, there to save us all from Armageddon. So why are our politicians not listening?

These are very much my views.

I am sure there are more reasons. I am not a politician and don’t have the mindset of one. But perhaps it’s time to accept that lobbying Government is a total waste of time. Maybe we need to rethink this completely and change direction? Author Stuart Maconie in his book ‘The Nanny State Made Me’ states ‘parks are indubitably a good thing for the nation’ and goes on to say, ‘We may mock much about the Victorians, their prudishness, their bigotry, their hats, but they put us to shame in many ways. In 1851, they were using public money to build parks for the betterment of ordinary people. Today, we close them to save money to give in bailouts and bonuses to the rich. … Sorry for the repetition. But the point is worth hammering.’ Hear hear.

So… £9 million to spend on pocket parks. Let’s not spend it all at once eh. Where do we go from here?

So I will bring my rant to an end. But let’s keep at it. Do Green Flag… just do it. Celebrate successes and most of all be advocates for what we do, cos if you don’t, no one else will.

Head of Parks, Heritage and Culture