In 2022, APSE published The State of UK Parks 2021. In 2016 the previous ‘State of the UK Public Parks’ report was published by the Heritage Lottery Fund. That report identified that there was a need for central government, local authorities and a variety of partners to work together to address the problem of declining budgets, and the impact of the loss of finance on the quality, availability and future sustainability of UK’s parks. In this 2021 ‘State of the UK Public Parks’ report, published by APSE, they are disappointed to have to repeat many of the warnings made 5 years ago. Funding for our parks is once again at a tipping point with the loss of parks funding in further decline from £500 million lost between 2010 and 2016 to a further £190 million in 2021. A total of £690 million over the past decade.

Whilst their report reflects on initiatives to stimulate parks, they find that continued austerity measures have not been ameliorated by central government support, which has amounted to sporadic and small-scale grants to support initiatives such as ‘pocket parks’ and small renovation projects. In many cases, funding can only be accessed by costly and inefficient bidding systems, which take little account of local need. As a consequence, the financing of urban parks has continued to be woefully inadequate for local authorities, who manage around 85% of the UK’s urban parks.

As a parks addict, Head of Parks, author, historian, and green flag judge… oh… as well as a park user… I visit many parks across the UK and am shocked to see the decline in our parks, which is becoming more and more apparent through declining infrastructure – footpaths, fences, street furniture, buildings, drinking fountains, play areas, and specifically to myself, the condition of bandstands. I call this ‘parkitecture’ – the architecture of our parks. They are the ingredients of what makes our parks, and it is where we see the greatest decline. Reduction of mowing regimes, now in the name of enhancing biodiversity, rightly so, is not a symptom of decline. Potholes in footpaths, rusty unpainted railings, gaps in play areas where equipment is removed, but in many instances, where lottery money has been thrown at many historic parks, we see significant decline. Buildings becoming ‘scruffy’, no longer getting that paint job, the once restored bandstand, falling into disrepair and in worse cases, where there is years of neglect where there has been no funding applied for. I was in Southport this weekend, primarily to see the Champions League Final in Liverpool and to enjoy the parade, but whilst there, I take opportunities to visit parks and green spaces. Southport is known for its parks, its flower show and its stunning herbaceous border along Rotten Row. I checked out both bandstands in Victoria Park and on Lord Street. Both are rusting, declining and unloved pieces of historic ‘parkitecture’. I am not blaming the council – Sefton Council have major challenges with Bootle and Crosby within its boundaries along with affluent Formby and Southport. They are typical of many councils – cash strapped and struggling.

My own authority at Southend on Sea is in a similar situation – investment in parks over many years has been virtually non-existent. We are trying to reverse this with a new 10 year strategy. It is the ‘parkitecture’ that is the greatest symptom of decline in our parks. It is up to the sector to keep on making our case for funding, working with organisations such as Keep Britain Tidy and the Green Flag Award, Fields in Trust, Historic England, National Trust and the Heritage Fund. We have to keep making the case for parks.  When I worked in Watford, I would frequently talk of MY parks -they were MY parks, but was often reminded they weren’t mine. My riposte was – whilst I am in charge of parks and their custodian – they are MY responsibility, therefore MY parks. 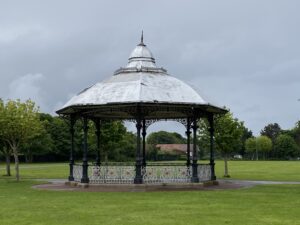